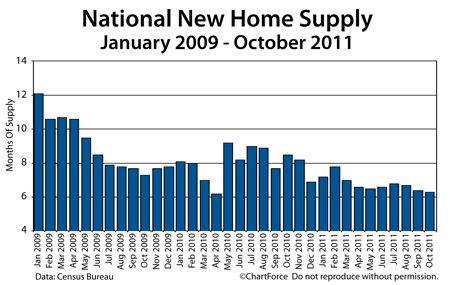 If you plan to buy of new construction in TN sometime in 2012, don’t expect today’s low prices. Like everything in housing of late, the market for newly-built homes appears to be stabilizing and, in some markets, improving.

As foreshadowed by this month’s strong Homebuilder Confidence survey, the Census Bureau reports that the number of new homes sold rose to a 6-month high in October, climbing to 307,000 units on a seasonally-adjusted, annualized basis.

A “new home” is a home that is considered new construction. It’s the opposite of an “existing home”.

Home buyers are comparing new construction to home resales and liking what they see. At the current sales pace, the nation’s complete new home inventory would now be depleted in just 6.3 months. This marks the lowest home supply since April 2010 — the last month of the last year’s federal homebuyer tax credit.

By building only to meet new demand, builders are keeping home supplies in check, and home prices stable. They’ve also found a niche market — 80% of homes sold last month sold for less than $300,000.

Unfortunately, the data may be incorrect.

Although the October New Home Sales report says that sales climbed 1.3 percent last month, the government’s data was published with a ±19.7% margin of error. This means that the actual New Home Sales reading may have been as high as +21.0 percent, or as low as -18.4 percent. Because the range of values includes both positive and negative values, the Census Bureau assigned its October data “zero confidence”.

As home buyers, then, we can’t take our market cues from the published data. Instead, we should look to other metrics including Housing Starts data and the aforementioned homebuilder confidence survey. Each points to strength in the new home market, and foretells higher home prices in 2012.

If you’re in the market for new construction, consider writing an offer soon. Home prices remain low and mortgage rates do, too — a combination that keeps home payments low. Next year, that may not be the case.