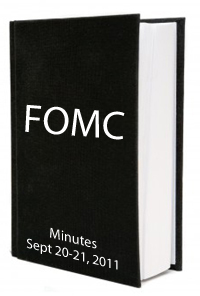 Wednesday, the Federal Reserve released the minutes from its 2-day meeting September 20-21, 2011.

The release shows a divided Fed in disagreement about the current U.S. monetary policy. The group reached compromise for new economic stimulus, however, and maintained its commitment to accommodative interest rates.

The Fed Minutes gets less press than the FOMC’s post-meeting press release, but it’s every bit as important. Because it details the conversations that take place among voting and non-voting Fed members at FOMC meetings, the Fed Minutes is an inside-look at the debates and discussion that lead to new monetary policy.

As examples, here are some of the topics covered at the September FOMC meeting :

Then, with Fed members divided on whether the central bank should add new stimulus, it reached a compromise instead, launching the $400 billion “Operation Twist” program. Operation Twist is meant to lower longer-term interest rates, including mortgage rates.

Since Operation Twist began, mortgage rates are higher by nearly 0.375%.

Also noteworthy within the Fed Minutes was concern for an economic slowdown and how the Federal Reserve may react. According to the record, a slowdown may prompt the Fed to introduce its third round of qualitative easing, or QE3. An out-sized stimulus plan would likely lead rates higher.

Nothing will happen until the Fed’s next meeting, however. Chairman Ben Bernanke & Co meet next November 1-2 for a 2-day meeting..